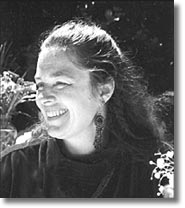 On February 4, 2002 Plenty lost a dear friend, sister, Board member, Treasurer and field worker when Karen Sharkey Flaherty passed away. Karen brought beauty, grace and courage into the Plenty circle. She was passionate with a gentle touch. She turned an unblinking eye on injustice in the world, especially the plight of women and children living in poverty. She lived for helping the victims of circumstances beyond their control, without hesitation, and often without consideration of her own health and well-being. Karen gave herself away. She had no enemies, only friends, by the thousands. Karen was a founding member of the Farm community where Plenty was born. She was a founding member of Plenty and served on the Board of Directors since 1988 and has been our Treasurer since 1989.

She co founded the Bhopal Justice Campaign to help the people of Bhopal, India obtain justice and compensation for their injuries as a result of a massive chemical accident at a Union Carbide plant that killed thousands of people in December 1984.

Karen was deeply involved in Plenty’s projects at Pine Ridge and Round Valley Indian Reservations. She was strongly committed to Plenty’s Fair Trade programs and the Indigenous Women’s Economic Development project (IWED), traveling to Beijing to attend the International Women’s Conference in 1995 as a delegate of Plenty to help build awareness of Fair Trade.

More recently, Karen was employed as a Project Administrator at the Florida Association of Voluntary Action for Caribbean Action (FAVACA) coordinating women’s development projects in the Caribbean and Central America and participated in joint Plenty/FAVACA projects in Dominica with the Indigenous Carib Peoples.

Karen was a big part of our lives and our work. We love her and miss her very much.

Karen is survived by her two children, mother and father, three brothers and a sister. Her family has established the Karen Sharkey Flaherty Fund to support small projects close to Karen’s heart that promote peace, justice, acceptance and understanding among people. Donations can be sent to PO Box 10775, Tallahassee, FL 32302. Plenty has also set up a memorial fund for Karen.

The preceding piece came from http://www.plenty.org/pb18_1/karen181.html and is a fitting tribute to her.

Her passions included the Volunteer Corps; The Farm, an intentional spiritual community in Summertown, Tennessee; and its global development agency, Plenty International.

She was committed to justice and peace, and will be remembered with love by staff, partners and friends.

I remember Karen from Minneapolis, Minnesota.  I went there in the 70s to work as a city planner and met her and Michael at a yoga class.  We ended up pooling our resources, buying a school bus, and hopping on board the "Caravan" led by Stephen Gaskin and traveling to Kansas City, the Southwest and California.  That experience may have been what led Karen and Michael to the Farm.  I later spent some time with Michael and Karen on the Farm's Ettrick Wisconsin branch.  Last time I talked to Karen, we talked about setting up this website together.

Just before she died, I had spoken to Karen about setting up a website for her Farm Net News and had offered her this web space. I had been hearing from her about once a month when I got the last call last October and we talked about doing the website.  She sounded ok, we had a lot of laughs, and we didn't run out of things to discuss.  I'm as shocked by her death as I am by the long time in took to hear the news of it in this age of the Internet, cell phones and instant messaging.

I hadn't heard from her for many months and then today (October 30, 2002) I got a call from Michael Flaherty and he told me the news.  He told me about all the memorials that have been held in Tennessee, Minnesota, Florida and California for Karen.  She left a deep, lasting impression on many people, myself included.  I'll miss Karen a lot.

She was full of really good spirit.  It's sad that she died through negligence in the hospital and not being cared for properly when she had spent her whole life caring for others.- Paul Terry Walhus

For news of more memorials about Karen, Michael Flaherty may be able to guide you.  He's at: mikerini@nelson-tel.net

To record your comments, remembrances of Karen, a topic has been set up:

We encourage you to record your own observations there if you knew Karen.

A lot more pictures of Karen at this Thumbnail page